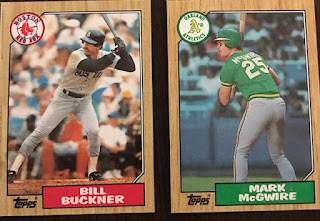 The kids and I went a bit on a rampage opening packs and we found some good ones:
Our first Future Star: Rafael Palmeiro
First All Star Rookie: Cory Snyder
Card # 1: Roger Clemens Record Breaker
Sammy Khalifa :The guy who was seemingly in every pack I bought in 1987.

I'll post the checklist soon so you can see some of the others but I pulled out the two in this post photo. When opening the packs, I tell the kids a little story about the players I remember. 'Dwight Evans had a cannon for an arm.' 'Dave Stewart beat the Sox every game he faced them it seemed, definitely in the playoffs'. For Buckner and McGwire, I could gave gone several ways butI told the kids McGwire crushed balls far over the Monster and Billy Buck was a tough guy who could rake. It was odd pulling his card this weekend and to hear he passed away.